It was apparent when GM Bob Quinn was hired in 2016 that Caldwell’s days as head coach of the Detroit Lions were likely numbered. While he undoubtedly has admiration for the job Caldwell has done, Quinn is ready to bring in one of his guys. And coming from the Patriots’ system, one that has brought unmatched success over the past two decades, trust must be given to Quinn’s plan regardless if you think Caldwell should’ve been retained.

Here are some of the candidates reportedly under consideration: 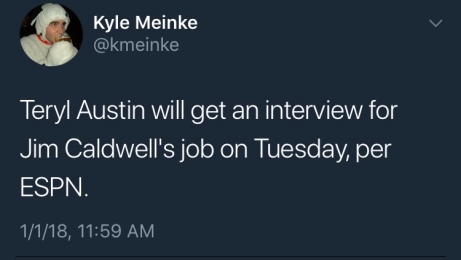 New England Patriots defensive coordinator Matt Patricia is likely Quinn’s number one target for the position. Quinn came to Detroit from his New England position as director of pro scouting and is very familiar with Patricia and the work he’s done.

Patricia’s defense has given up less than 20 points per game every season since 2014. Teryl Austin’s defense also did that in 2014 and has been slightly above that mark since. Austin has done a great job leading the defense, which is why he will also be a top candidate to take the job. If Patricia is hired it seems unlikely that Austin will remain with the team.

In terms of offensive minds, the Lions have their eyes on a couple top offensive coordinators around the league, including one with head coaching experience.

Matt Nagy, offensive coordinator of the Kansas City Chiefs the past two seasons, has excelled in his play-calling duties, averaging more than 400 yards and nearly 30 points in five games since assuming the role.

Josh McDaniels, offensive coordinator of the Patriots and another person Quinn is very familiar with, had a tough time in his first stint as head coach of the Denver Broncos and famously drafted Tim Tebow. But the leader of the best offense in the NFL has since matured and is primed for the right opportunity.

If Quinn decides to go with an offensive mind it is unlikely that Jim Bob Cooter will return.

Rookie head coaches had surprising success this year. That includes Sean McDermott who led the Buffalo Bills to their first playoff appearance since 1999, ending the longest playoff drought in sports.

So the recipe is there. Rookie head coaches are not as scary as they’re made out to be. Although, as a follower of Detroit sports, this is reminiscent of the Detroit Tigers.

This move to fire Caldwell is comparable to the Detroit Tigers and the Jim Leyland situation. After one of the most prosperous decades in Tiger history but never winning the World Series, fans were split on whether he should stay or go. Leyland and the Tigers decided to part ways and the Tigers hired rookie manager Brad Ausmus to take over a team that was ready to win. We all know how that just ended.

Now, after the most prosperous four-year stretch since 1967-72, the man who led the Lions on that charge is gone. Lions’ fans are left hoping that the new direction under the new coaching regime will continue this unprecedented stretch of consistency.