It looks like Blake was too busy signing autographs pregame instead of getting his proper stretching in. It led to Blake being a little tight in the hamstrings in the first quarter of the first game at Little Caesar’s Arena and this ugly block on his first attempted dunk of the season.

Now, I won’t deny this. That was an absolutely savage grown-man block of a dunk from one of the best human highlight reels of the past decade. So, predictably, I’m seeing a lot of hearsay about Blake’s knees being so debilitated that he’s a mere shadow of his former self. 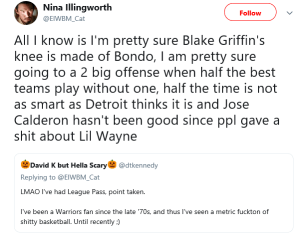 Disrespecting Blake and Lil Wayne both within the same terribly formulated run-on sentence is slander that should not, cannot and will not be tolerated now or at any point in the future. However, the besmirching of Jose Calderon is fair game for all of time.

The simple fact that Blake can no longer jump over the moon after a decade in the league and multiple knee surgeries shouldn’t surprise you. That’s why his mid-range game has been on another planet and he added the 3-point shot to his arsenal over the past few years. It’s a little thing we humans like to call evolution.

So get your shots in on Blake while you can because next game I guarantee that he gets his proper stretch and is ready to dunk on somebody like MJ at the end of Space Jam.