Tis the season for eggnog, self-loathing and Netflix until you can’t keep your eyes open anymore. The winter is just flat-out dreary. There’s not much to be excited about for the next three months so part of the world decided that this would be the best time to give kids new games and toys to occupy their time while the parents can have some to themselves while everybody is trapped inside as winter ramps up. Or is it somebody’s birthday? I can’t entirely recall.

Anyway, nothing can brighten your 4 p.m. drive home in the dark quite like a beautifully fascinating display of Christmas lights. However, some people take up enough electricity to power a small Indian village for a decade and those are the people I do not wish to associate with. If you have a display that shines brighter than fiery corona of the sun then you’re either an absolute crazy person or you have a child under 7 years old. Either way I want no part of that. So, without further ado, here are some of the most outrageously over-the-top Christmas displays around metro Detroit that will definitely make your neighbors hate you (thanks to CBS Detroit for doing the grunt work on this one).

One person has gone so far as to create a Facebook page with viewing hours for the light display. 6pm-11pm so as to not be so wasteful. It’s the little things that add up to big things you know.

Vineyard Avenue Light Show has an absolutely riveting story………NOT! (That’s a Borat joke for ya, folks). 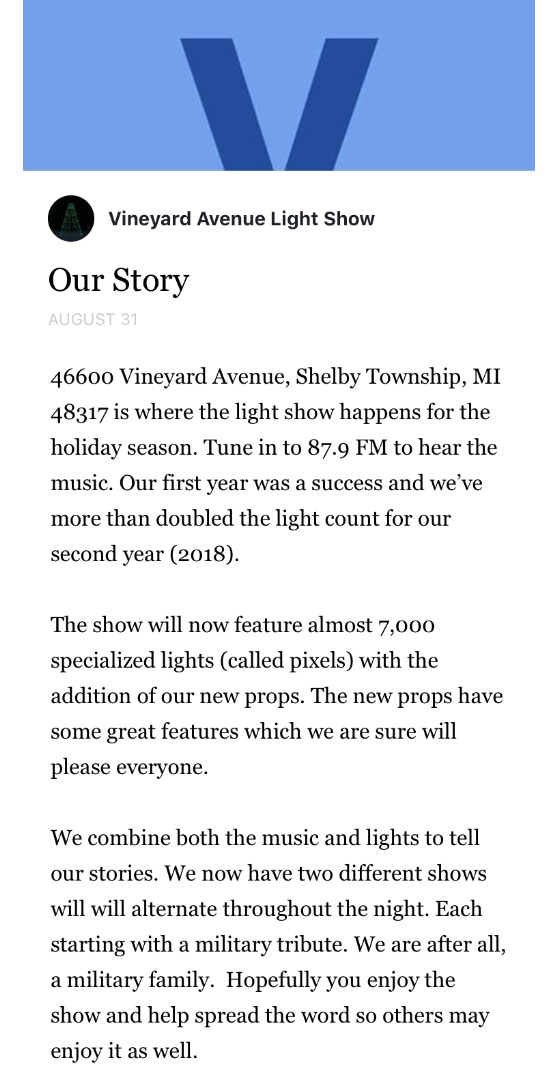 There are actually only two pictures on the FB page and they are incredibly unimpressive. Maybe I’m missing something but I’ve seen better displays than this left on foreclosed homes.

Another individual has gone so far to make a website for his Christmas lights display as well as Halloween pictures. I really hope this website is for family and he doesn’t really expect people to click. If he gets more clicks than this site I should probably shut down. I want the numbers.

Wait, am I seeing that correctly in the bottom-left corner? 51,310 visitors in 10 years? Honestly if I don’t beat that number in a quarter of that time I will call it quits and that’s a promise. I would give him the benefit of the doubt since he claims to have a 5-year-old but he said he’s been doing this since 1996. That’s 22 years!

Some of the most insane photos below are from 2005 which is well over 5 years ago and before the child would have been born. Besides that, the website is far too aggressive for any Christmas light display. I don’t care how great it is. That is case enough for me to declare the owner of this website and creator of this display as a definitive crazy person. Not only does it probably take him hours to put the display up in freezing cold temperatures, he has to take them down in even more frigid conditions.

If you really want to see a Christmas light display head to Green Field Village in Dearborn and take your lady on a nice horse carriage ride with hot chocolate. That sounds like a beautiful night right there if you’re into that sort of thing. But I’m not a lunatic who wants to sit in a carriage in the freezing cold while forcing an animal to drag me along a lighted path. Happy Holidays!