Earlier today Jeff Risdon of The Lions Wire published the worst opinion of the day. He admitted that he doesn’t give a damn about morals, integrity, character or basic human decency. No wonder The Lions Wire twitter account tweeted this out at 3:28 in the morning. 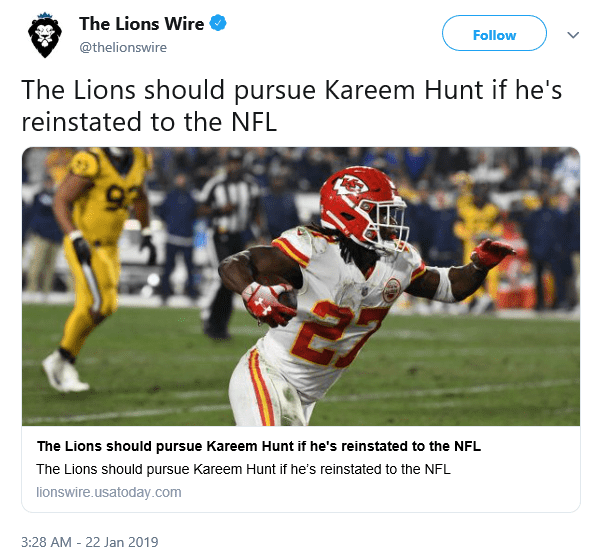 Simply putting out the article should tell you Risdon’s general stance on abuse of women. I let Twitter know that here at Just In : Just Now we do not in any way condone the signing of a man who would kick, brutalize and flat-out assault a woman.

And the worst opinion of the day goes to @JeffRisdon of @thelionswire by a mile!! Congrats! https://t.co/YcLsqoKxMW

Risdon’s response further proved his disregard for the safety of women by attempting to justify his foolish and small-minded opinion.

Right off the bat Risdon makes it clear that he cares more about his favorite team improving at one position on the football field more than abuse of women. Risdon’s rationalization is that it’s okay to turn a blind eye to assault of a woman because others have done worse and are still playing in the NFL. It makes me want to vomit.

I simply replied with the video of Kareem Hunt assaulting a woman in a hotel and thought the argument would be over.

https://t.co/cpHWnSwacr Other players have done worse so this is ok? Sorry, not for me. Argument over. pic.twitter.com/p9FA9aVLLN

But nope! Risdon was not done. He continued to double-down on his opinion of employing a woman-beater.

“I didn’t condone what he did,” says Risdon. How about we check on the official definition of the word ‘condone.’

By wanting to sign Kareem Hunt through rationalization that other players have done worse and are still in the league, Risdon is clearly accepting the behavior of assault of women which allows those types of egregious actions in the NFL to continue. It’s sad that a blog would have to spell it out so simply for the ‘Managing Editor’ for The Browns Wire and Lions Wire of the USA Today Network to understand.

But in the end, Risdon REALLY just wants you to know that he wants the Lions to do whatever it takes to win at the expense of morality, ethics and women.